United Nations: HOW DOES YOUR COUNTRY VOTE on the Nuclear Weapons Convention? 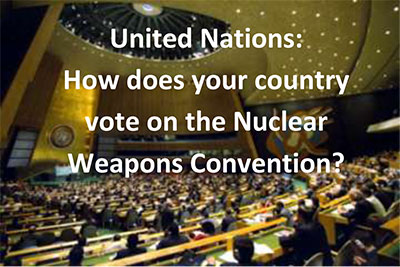 Every year since 1996 the United Nations General Assembly has voted on a resolution calling on States to commence negotiations leading to the conclusion of a Nuclear Weapons Convention. The resolution arose from the decision of the International Court of Justice in July 1996 that the threat or use of nuclear weapons is generally illegal (based primarily on the application of international humanitarian law) and that “There exists an obligation to pursue in good faith and bring to a conclusion negotiations leading to nuclear disarmament in all its aspects under strict and effective international control.”

In 2010, the draft resolution [PDF] was amended to include reference to key agreements from the 2010 Non-Proliferation Treaty Review Conference that any use of nuclear weapons would result in catastrophic humanitarian consequences, that international humanitarian law applies to all States at all times, and that all States must make special efforts to build the framework for a nuclear-weapons-free world. The revised UN resolution also refers to the UN Secretary-General’s Five-Point-Plan for Nuclear Disarmament and the Model Nuclear Weapons Convention which has been circulated by the UN and noted by the UN Secretary-General as a useful guide for NWC negotiations (See Full version of UNSG’s Five-Point-Plan).

Click here [PDF] to see how your country voted at the UN General Assembly First Committee in 2010.
For further information see:
Momentum toward a nuclear weapons convention or framework of agreements