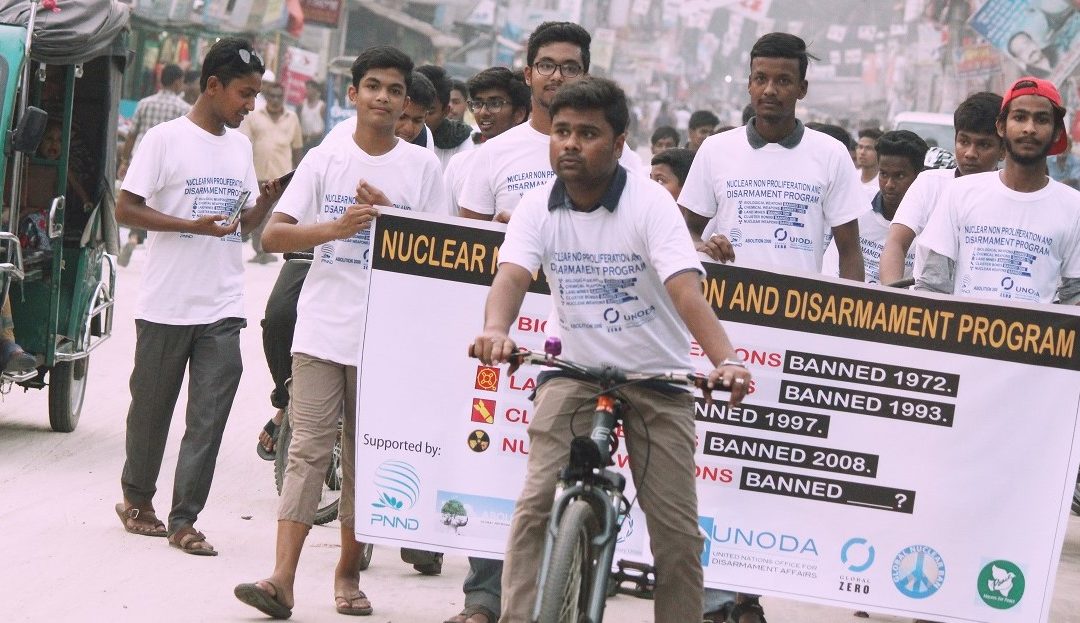 Nearly 100 students and young campaigners took to the streets on bicycles and feet in Saidpur City, Bangladesh on May 20 to highlight the threat of nuclear weapons and to call for global nuclear disarmament.

The event was organised by members of the Leo Club of Sunflower Saidpur City, a youth service organisation associated with Lions Club International of Bangladesh. It was inspired by international parliamentary and youth events on nuclear disarmament held in Dhaka, Bangladesh during the time of the 136th Assembly of the Inter-Parliamentary Union (IPU).

“As youth we are the future leaders future leaders and we all have a strong potential to make a change in the world,” said Leo Mostafiz Ahmed Raza, one of the event organisers.

“Bangladesh is not a nuclear armed state,” said Nasim Riza, one of the other organisers of the event. “But we are still threatened by nuclear weapons, like everyone in the world, because a nuclear accident might occur anytime or anywhere.”

In addition, Bangladesh is impacted by under-development and climate change. The Bangladesh parliament, in a resolution on nuclear disarmament, has highlighted the fact that the US$100 billion global nuclear weapons budget could instead be used to address climate change and contribute significantly to the achievement of the Sustainable Development Goals.

IPU President Saber Chowdhury (Bangladesh), the author of the Bangladesh parliament resolution, has also made climate protection and nuclear disarmament principle issues for the IPU and its member parliaments to take action.

The Bangladesh youth action gave support to this call, and to the key international organisations and networks working for nuclear abolition – including Abolition 2000, Global Zero, Mayors for Peace and PNND. Their bicycle ride started with a rally at the Railway Station, before traveling along all the major roads of the city, before ending with another rally in front of the GRP Center.