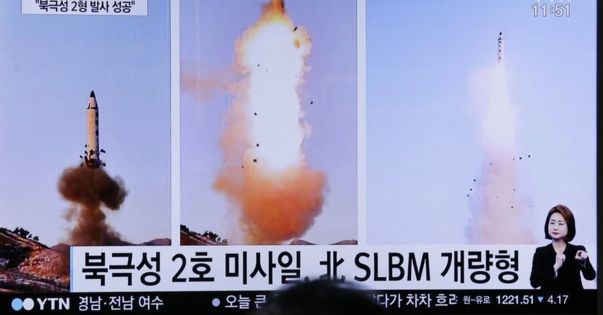 Last week, President Trump announced that ‘North Korea best not make any more threats to the United States’ or ‘they will be met with fire and fury like the world has never seen.’

The announcement sent diplomatic shock-waves around the world, and elevated the tensions between North Korea and the USA. North Korea responded that, if attacked, they would create an ‘enveloping fire around Guam,’ a key US military base in the Pacific.

Parliamentarians, mayors, religious leaders and other leaders of civil society around the world are calling on President Trump and leader Kim Jong-un to step back from the nuclear brink and negotiate an end to the nuclear crisis.

Global prayer for peace in Korea

On August 13, religious leaders and communities around the world prayed together for peace on the Korean Peninsula. The joint prayer was prepared by the Korean Christian Federation (KCF) from North Korea and the National Council of Churches in Korea (NCCK) from South Korea. The global prayer was supported by the World Council of Churches (WCC), World Communion of Reformed Churches and the World Evangelical Alliance.

Bishop Efraim Tendero, secretary general of the WEA, comments: “Dialogue and understanding is the right and moral way forward as we uphold the dignity and great value of every people who bear the image of the God of Peace.” He added  “On this Sunday of prayer, we bring before the Lord our plea for a peaceful resolution and the reunification of the Korean Peninsula.”

Parliamentary calls for diplomacy from Japan, South Korea, USA and around the world

Senator Ed Markey, Co-President of Parliamentarians for Nuclear Nonproliferation and Disarmament (PNND) last week called on President Trump to ‘immediately authorize the State Department to engage in direct discussions with North Korea‘ in order to prevent a nuclear catastrophe. Markey has also initiated action in the Senate to remove the President’s authorisation to unilaterally launch a first strike with nuclear weapons (without having to consult the US Congress). ‘We must ensure that President Trump cannot turn his ‘fire and fury’ rhetoric into reality with a pre-emptive nuclear strike,‘ says Senator Markey.

–   64 Members of the US House of Representatives urge diplomacy

PNND members Barbara Lee and John Conyers have initiated two congressional letters urging diplomacy – one in May to President Trump endorsed by 64 congress members and another letter last week endorsed by more than 60 of their Democratic colleagues, which was sent to Secretary of State Rex Tillerson.

“President Trump’s belligerent rhetoric towards North Korea is dangerous. It’s imperative that President Trump de-escalate tensions and pursue diplomacy with North Korea,” said Congresswoman Lee. “Instead of saber-rattling, we should be pursuing direct talks with North Korea to prevent this crisis from spiraling out of control…. As a daughter of a veteran of the Korean War and a member of the Military and Veterans Appropriations Subcommittee,  I will continue to demand that  President Trump provide Congress with a comprehensive strategy for deterring North Korea that puts diplomacy and non-military strategies first.’

Conyers, one of two remaining Korean War Veterans serving in Congress, said, ‘As someone who has watched this conflict evolve since I was sent to Korea as a young Army Lieutenant, it is a reckless, inexperienced move to threaten military action that could end in devastation instead of pursuing vigorous diplomacy.”

Jeremy Corbyn, leader of the UK Labour Party and a PNND Council member, has publicly called on President Trump and Korean leader Kim Jong-un to ‘stop the war of rhetoric’ and enter into negotiations to end the crisis. Corbyn has also called on UK Prime Minister Theresa May to support diplomacy and ‘not to commit any of Britain’s armed forces to military action in the Korea crisis.’

PNND Co-President Bill Kidd submitted a motion to the Scottish parliament last week calling for diplomacy to resolve the North Korean crisis and highlighting the proposal for a North East Asian Nuclear-Weapon-Free Zone.

‘That the Parliament notes the increasing tensions and threat of military conflict arising from North Korea’s nuclear and missile capabilities; is supportive of a letter to President Trump, which has been endorsed by 64 members of the United States House of Representatives, reminding him that military strikes without congressional approval would violate the constitution and urging him to therefore follow a diplomatic approach, and notes also the support of US policy experts, including Morton Halperin, who it understands was a high-level policy official in the Johnson, Nixon and Clinton administrations, who support the concept of a north east Asia nuclear weapon-free zone.’

The current crisis with North Korea is not the first time the nuclear issue and threats of war have arisen. On one previous occasion, 80 Korean and Japanese parliamentarians endorsed a Joint Statement on Diplomacy and Denuclearisation in North-East Asia, which included a call for negotiations on a NE Asia Nuclear-Weapon-Free Zone.  The endorsers include a number of high-level parliamentarians including Mr Taro Kono, the current Foreign Minister of Japan and former Co-President of PNND.

On August 9, Nagasaki Mayor Tomihisa Taue repeated his call on the Japanese government to explore the proposal for a North-East Asia Nuclear-Weapon-Free Zone as a way to resolve the nuclear crisis with North Korea. Mayor Taue and PNND East Asia Coordinator Hiro Umebayashi had previously encouraged other mayors in Japan to support the NE Asia NWFZ proposal, and 545 have done so. 126 religious leaders in Japan have also joined the call for a NE Asian NWFZ.

For more information see US and other legislators call on President Trump to step back from the nuclear brink.

On August 14, 2017, Federica Mogherini, the Vice-President of the European Union and its High Representative for Foreign Affairs and Security Policy, held a special meeting of the EU Security Committee to discuss the escalating Korean crisis. The EU played a critical role in the successful negotiations on the Iran nuclear program, and could possibly also play an important role to support negotiations between the key parties in the Korean nuclear conflict.

After the meeting, Ms Mogherini released a statement offering the services of the EU to help negotiate a peaceful solution to the Korean nuclear crisis.

United States Senator Ed Markey and Congressman Ted Lieu have introduced legislation into the US Congress restricting the authority of the President to launch a nuclear war without consulting Congress. Sign the petition to support this legislation.