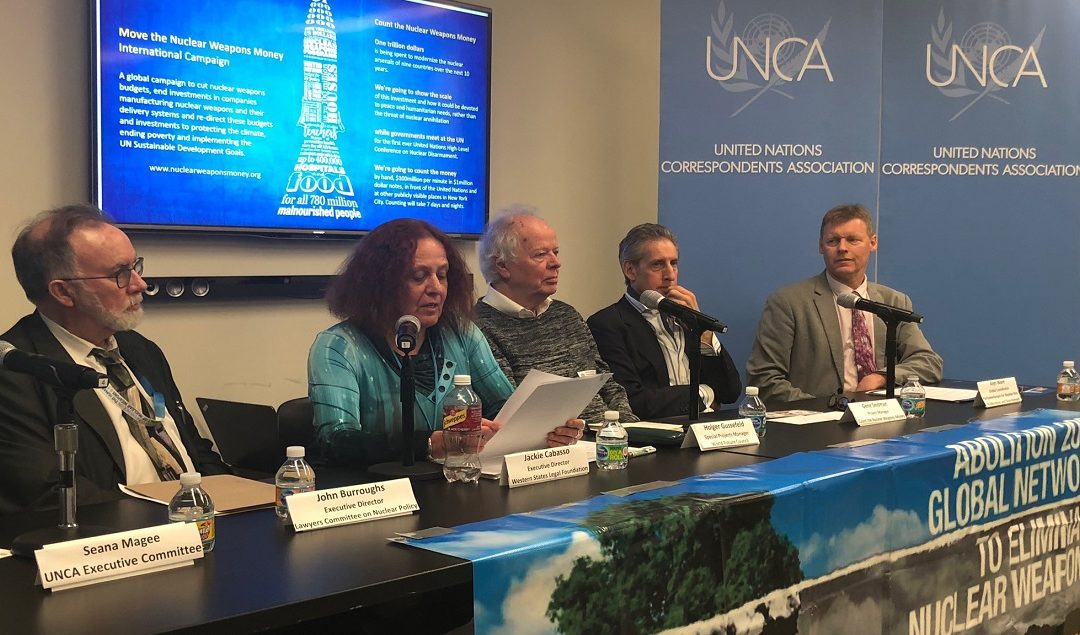 March 28: At a media briefing for journalists at the United Nations in New York today, nuclear disarmament experts and campaigners from Abolition 2000 member organizations highlighted the critical need for successful diplomacy on nuclear-weapons related conflicts, including in Northeast Asia, between the US/NATO and Russia, and at the upcoming UN High-Level Conference on Nuclear Disarmament.

“Putin’s March 1 speech and the February 2 U.S. Nuclear Posture Review make clear that Russia and the United States are poised to resume nuclear arms racing on a scale not seen since the dark days of the Cold War,” said John Burroughs, Executive Director of the Lawyers’ Committee on Nuclear Policy (USA) and UN Representative for the International Association of Lawyers Against Nuclear Arms.

“Arms racing is dangerous in itself. It also is contrary to the Nonproliferation Treaty obligation to negotiate ‘cessation of the nuclear arms race at an early date.’  Russia and the United States should seize every opportunity to put the threatened nuclear arms race in reverse.”

An Open Letter to the Leaders of USA, South Korea and North Korea signed by more than 100 US civil society groups, was released at the UN media briefing by Jackie Cabasso, Executive Director of Western States Legal Foundation.  The letter expressed support for the upcoming inter-Korean summit in April and the US-DPRK summit in May, and urged the leaders “to patiently and diligently seek common ground.”

The letter states: “Dialogue and diplomacy is essential if we are to prevent a war that would likely result in an unthinkable disaster for the Korean Peninsula, the United States and the world…..We recognize that one encounter between US and North Korean leaders will not likely produce an agreement that leads to a lasting solution. But the planned summits offer the potential for starting a serious process that could move us decisively away from the current crisis.”

According to Cabasso, “This letter has taken on added significance in light of the appointment of John Bolton as US National Security Advisor.  In a March 1 Wall Street Journal op-ed Bolton called for a preemptive military strike on North Korea.  The open letter to President Trump, President Moon and Chairman Kim is an unambiguous repudiation of Bolton’s warmongering, with more than 100 peace, faith-based, professional, and Korean-American organizations across the country welcoming the extraordinary diplomatic opening that has appeared.”

“The United Nations has key roles to play in promoting and supporting diplomacy, nuclear risk-reduction and disarmament,’ said Jonathan Granoff, President of the Global Security Institute. “The upcoming UN High-Level Conference on Nuclear Disarmament comes at a vital time to build global support from UN Member States. We encourage all UN members to participate at the highest level, and to give full support to nuclear risk-reduction and disarmament measures.”

“States could use this opportunity to either sign the new Treaty on the Prohibition of Nuclear Weapons or commit to a negotiation process to stop the new arms race, lower nuclear risks, and fulfill existing disarmament obligations by agreeing to a phased process of reductions leading to the universal, legally enforceable, verifiable elimination of all nuclear weapons,” said Granoff. “As a first step toward a safer saner world, the nine States with the weapons must all pledge never to initiate a nuclear war.” The UN High Level Conference on Nuclear Disarmament is scheduled to take place in New York May 14 -16.  Nuclear disarmament campaigners plan to use the occasion to focus public attention on the nuclear-weapons industry, a key stimulus to the nuclear arms race.

“Companies manufacturing nuclear weapons and their delivery systems are a powerful lobby to increase nuclear weapons budgets, and to expand nuclear weapons policies in order to justify this massive public spending,” said Alyn Ware, Global Coordinator of Parliamentarians for Nuclear Nonproliferation and Disarmament

‘The public is not aware of the colossal amount of money wasted on nuclear weapons, and what an incredible contribution this money could instead make to ending poverty, protecting the climate and providing education, housing and basic health care for all,’ said Holger Gūssefeld, Special Projects Coordinator for the World Future Council. “We will demonstrate this by counting out 1 trillion dollars –- the nuclear weapons budget for the coming decade — while the UN High-Level Conference is taking place.”

“Artists have designed mock $1 million notes. We will count 1 million of these one-by-one over seven days and nights outside the United Nations and in public locations in New York,’ said Gene Seidman, Project Director for Count the Nuclear Weapons Money. “While counting – at $100 million per minute – we will shine the light of shame on companies manufacturing these weapons of mass annihilation, and we will highlight areas of economic, environmental and social need that could instead be met with these funds.”

For more information see Move the Nuclear Weapons Money and the Abolition 2000 Working Group on Economic Dimensions of Nuclearism.