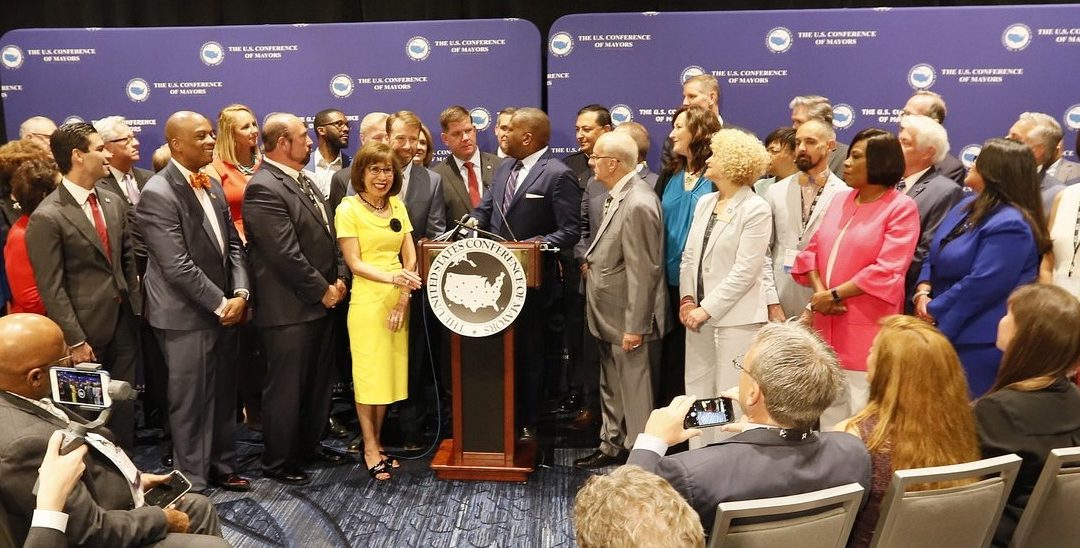 Boston, MA – Today, at the close of its 86th Annual Meeting, the United States Conference of Mayors (USCM), unanimously adopted a sweeping resolution “Calling on the Administration and Congress to Step Back From the Brink and Exercise Global Leadership in Preventing Nuclear War.”

In the resolution, “the USCM welcomes the dramatic diplomatic opening between the U.S. and North Korea and urges President Trump to patiently and diligently work with North and South Korea for a formal resolution of the Korean War and normalized relations with a denuclearized Korean peninsula.”

The USCM also “reaffirms the importance and efficacy of the 2015 Joint Comprehensive Plan of Action negotiated by Iran, the U.S. and 5 other nations to limit Iran’s nuclear program in exchange for sanctions relief, and calls on [the] U.S. Administration to pursue diplomacy and normalized relations with Iran with the goal of establishing a zone free of nuclear, chemical and biological weapons in the Middle East.”

The resolution notes that tensions between the United States and Russia “have risen to levels not seen since the Cold War” and warns that “this is only one of many nuclear flashpoints, from the Korean Peninsula, to the South China Sea to the Middle East and South Asia, where all of the nuclear-armed states are engaged in unpredictable conflicts that could catastrophically escalate out of control.”

The resolution also warns that the February 2018 U.S. Nuclear Posture Review “manifests a commitment to an increasing and long-term reliance on nuclear arms, lowers the threshold for use of nuclear weapons”, proposes new warheads and missiles, and “endorses current plans to sustain and upgrade existing nuclear forces and infrastructure projected to cost well over a trillion dollars over the next three decades.”

Noting that “in 2017 the United States spent $610 billion on its military, more than two and a half times as much as China and Russia combined, amounting to 35% of world military spending”, and that this huge amount is slated to rise significantly in coming years ”the USCM “calls on the President and Congress to reverse federal spending priorities and to redirect funds currently allocated to nuclear weapons and unwarranted military spending to support safe and resilient cities” and to meet basic human needs.

The USCM resolution expresses deep regret that the United States and the eight other nuclear-armed states boycotted last year’s negotiations for a Treaty on the Prohibition of Nuclear Weapons (TPNW) and urges the U.S. government to “embrace the TPNW as a welcome step towards negotiation of a comprehensive agreement on the achievement and permanent maintenance of a world free of nuclear arms”.

Finally, “the USCM calls on the United States to lead a global effort to prevent nuclear war by renouncing the option of using nuclear weapons first; ending the sole, unchecked authority of any president to launch a nuclear attack; taking U.S. nuclear weapons off hair-trigger alert; cancelling the plan to replace its entire arsenal with enhanced weapons; and actively pursuing a verifiable agreement among nuclear armed states to eliminate their nuclear arsenals.”

The USCM, the nonpartisan association of 1,408 American cities with populations over 30,000, has unanimously adopted Mayors for Peace resolutions for 13 consecutive years. Resolutions adopted at annual meetings become USCM official policy.

As noted in this year’s resolution, “Mayors for Peace, which is working for a world without nuclear weapons and safe and resilient cities as essential measures for the realization of lasting world peace, has grown to 7,578 cities in 163 countries and regions, with 213 U.S. members, representing in total over one billion people”. Mayors for Peace, founded in 1982, is led by the Mayors of Hiroshima and Nagasaki.

See full text of resolution with list of 26 co-sponsors: http://wslfweb.org/docs/USCM2018MfPres.pdf