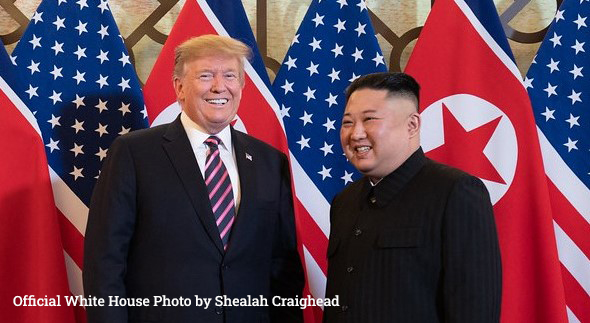 See below for statements of Abolition 2000 organisations in response to the USA/DPRK agreement.

In their historical meeting on Monday night, USA President Trump and North Korea Leader Kim Jong-un announced an agreement under which each country commits to:

In addition, Kim Jong-un committed to ‘work towards complete de-nuclearisation of the Korean Peninsula.’

Following the signing of the joint agreement, President Trump announced that a first step by the USA in implementing the agreement would be to cease the US-led war games exercises off the coast of the DPRK.

Members and affiliates of Abolition 2000 have been active on the North East Asian nuclear issue for years. However, such actions to encourage such a diplomatic approach to the developing crisis were stepped up since August 2017 when President Trump and Kim Jong-un traded nuclear threats. Jackie Cabasso at a UN press conference presenting a joint statement of USA civil society organizations calling on the Korean and US Summits to agree to a diplomatic solution.

Among the many actions have been: Protest for peace in Seoul

Abolition 2000 member organisations and networks respond to the agreement

‘Such actions have helped pave the pay to a reversal of the nuclear threats between USA and DPRK, and a start to peace,’ says Alyn Ware, member of the Abolition 2000 Working Group on Nuclear Risk-Reduction. ‘However, the road to peace and de-nuclearization will be rocky. We encourage nuclear abolition campaigners to stay active and engaged to ensure success.’

‘Commentators are eager to say that the summit statement is nothing new, but the key is that it has taken place,’ says Kate Hudson, General Secretary of Campaign for Nuclear Disarmament (UK). ‘Just months ago we were looking at the possibility of nuclear war. Today the world has pulled back from the brink. Only cynics would think that a negligible achievement.’

‘Denuclearization of the Korean Peninsula would be a significant step forward in ridding the world of the nuclear weapons threat,‘ said Karipbek Kuyukov (Kazakhstan), second generation victim of nuclear tests and Honorary Ambassador of the ATOM Project. ‘If North Korea ultimately dismantles its nuclear arsenal, North Korea will join my country as an example of the positive effects of denuclearization. Kazakhstan inherited thousands of nuclear weapons following the collapse of the Soviet Union but chose to dismantle those weapons to join the international community as a peaceful partner. The world is eager to see North Korea do the same.’

‘This historic summit clearly shows that peaceful settlement through dialogue is the only way to resolve problems,’ says YASUI Masakazu, Secretary General of the Japan Council against A and H Bombs (Gensuikyo). ‘Saying that “having talks is a waste of time” and calling for “placing maximum pressure (on DPRK),” the Japanese government has taken strong-arm tactics. The danger and failure of this stance has been already made clear. The government of Japan should make sincere effort for peace, the denuclearization of the Korean Peninsula and the normalization of the two countries.’

‘There is still some way to go in negotiating a final settlement that will receive the full endorsement of the nuclear disarmament movement worldwide,’ says Achin Vanaik and Lalita Ramdas of the Coalition for Nuclear Disarmament and Peace (CNDP), India.  ‘Given the past history of relations between North Korea and the US, the global peace movements and the CNDP will constantly monitor the ongoing process on the ground and seek to promote cumulative progress to the desired end.’

‘There will likely be many steps along the way,’ says Kevin Martin of Peace Action USA, ‘but we are on the path to peace on the Korean peninsula, toward resolving one of the world’s thorniest conflicts. The summit would have been unimaginable just a few short months ago, when threats of nuclear war were hurled about.’

‘Since two countries have committed to following up the additional negotiations, then they must take details up and meet up with each other wherever in Washington, or in Pyongyang,’ says Hochul Jung, Citizens’ Coalition for Economic Justice (South Korea). ‘North Korea should comply with the complete denuclearization of the Korean Peninsula, whereas America should stop the sanctions and US-DPRK will [should] not only conclude their peace agreement but also declare the end of Korea’s war. Meanwhile, we take note of South Korea’s role in future, of course acknowledging its previous role that was performed by the government that contributed to peacemaking between DPRK and US.’

‘The two Koreas, the U.S., China, Japan and Russia should add to the momentum created since the Winter Olympics by implementing bilateral and multilateral follow-up actions,’ says Pax Christi International. ‘for example, by opening the railroad line between North and South Korea, having new nuclear weapons reduction talks between the U.S. and Russia, and the U.S. and North Korea deciding to open offices in their capital cities before the end of 2018.’