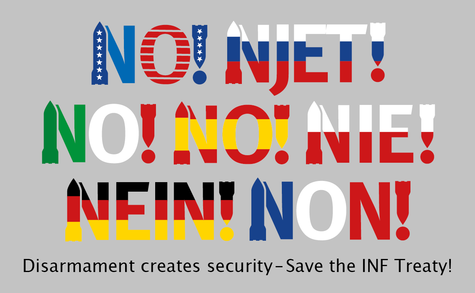 On the 2nd of February 2019, the USA is expected to formally start the process of withdrawing from the Intermediate-range Nuclear Forces (INF) Treaty.  This Cold War Treaty effectively removed over two and a half thousand missiles which were to be used in a limited nuclear war in Europe.

As fears among peace activists grow with the renewed threat of a new nuclear arms race, on the 17th of January, Abolition 2000 hosted a webinar to bring together activists from around the world with experts from the USA, Russia, the UK and Germany in order to understand the history behind the treaty, the context of the situation we’re currently in, and what actions can be taken to try to save the treaty.

“US President Trump’s announced intention to withdraw the United States from the Intermediate-Range Nuclear Forces (INF) Treaty is another sign of deepening crisis among the nuclear-armed states. Following the 2002 US withdrawal from the Anti-Ballistic Missile Treaty, it imperils the entire structure of arms control and disarmament, including prospects for extension of the New START Treaty which expires in 2021, and could lead to new, unpredictable rounds of arms racing.”

Cabasso then recalled that, “the elimination from national armaments of atomic weapons and all other major weapons adaptable to mass destruction” was included in the first ever UN resolution of January 24th 1946.  “It seems that the nuclear-dependent states are going in the opposite direction,” she concluded.

The first speaker, Andrew Lichterman from Western States Legal Foundation in the United States talked about the history of the treaty and the “Special Verification Commission” (SVC) established by its provisions, the purpose of which is to resolve treaty compliance issues.  Although there have been meetings of the SVC in 2013, 2016 and 2017, these have taken place in the context of increasing US-Russia tensions over the decision by the people of Crimea to become independent of the Ukraine and seek incorporation into the Russian Federation.  In the most recent meeting in mid-January the US dismissed offers of inspections.

In addition to claims of Russian non-compliance, Lichterman explained that the US is possibly also looking to bypass limitations imposed by the INF in order to counter an ever-growing imagined threat from China.

Pointing to the increased dangers of a world without arms control treaties, Lichterman explained:

“It is important to note that arms control agreements, and the institutions and verification mechanisms that sustain and are sustained by them, can reduce the risk of war in ways that go beyond the limitation of particular dangerous armaments… They allow the military and political leadership of the adversaries to better understand each other’s intentions, and their fears…  The best course would be to use the dispute over the INF Treaty as a moment to renew, rather than discard, the negotiating frameworks and institutions that played a significant role in avoiding catastrophe during the Cold War.”

Pavel Podvig, from the United Nations Institute for Disarmament Research, and expert in Russian nuclear forces posed the question, “Do we know if Russia actually violated the treaty?”

He answered by saying, “Probably yes”.

“Russia of course denies that, and we don’t know this for certain, because we haven’t seen actual evidence that the United States claims it has,” he pointed out.

But even given that Russia may have violated the treaty, he posed the follow-up question, “Was this violation in any way serious enough from a military or political standpoint to warrant the kind of reaction that we see?”  He concluded that it is not as “it doesn’t really change the level of threat that Russian nuclear forces could pose to Europe.”

Dave Webb, from the UK Campaign for Nuclear Disarmament, pointed out the hypocrisy of the US, and NATO which has enthusiastically backed the US position on Russian non-compliance, “but of course they don’t mention the establishment of the US and NATO missile defence bases in Eastern Europe, which has been a problem seen by Russia for many years now.”

Webb pointed out the concern that withdrawal and destruction of this treaty “threatens a new dangerous arms race that brings us even closer to the possibility that nuclear weapons will actually be used and the disastrous consequences that that would have on all life on the planet.”

He then gave us a history lesson of the social protests in the UK during the height of the Cold War in which thousands of people, mainly women, protested at nuclear sites in the UK, causing incredible disruption and irritation to the UK government at the time.  However this protest and those in other countries, undoubtedly noticed by Reagan and Gorbachev, was part of the social background of discontent that led to the INF treaty in the first place.

Our final presenter, Regina Hagen from the German section of Abolition 2000 and managing editor of the German magazine, Science and Peace, spoke from a German perspective, but also used her slides to graphically show the proximity of various European countries to Moscow, all well within the range established by the INF treaty of 5500km.  “If the United States initiates a new arms race for weapons in that range, all of Europe would be under threat and maybe we should remember that the pre-warning time for mid-range missiles might be as brief as 5 minutes.”

Furthermore, pointing to the data from NATO’s own website, it shows that military infrastructure for the US missile defence system is to be found across Europe: in Poland, Germany, Spain, Romania and Turkey, not forgetting the additional nuclear weapon hosting countries, the UK, France, the Netherlands, Belgium and Italy.  If an arms race is unleashed, it is clear that Europe will be the ground zero for nuclear war.  This is coupled with the US Defence Department’s own expressed intention to expand missile defence and purse advanced technology including laser weapons, bringing us back to the spectre of Star Wars so disturbingly promoted by Ronald Reagan.

Hagen insisted that it would be perfectly possible within the provisions of the existing treaty, together with the application of good will, to convene the committee that can resolve all the compliance issues.

In our panellist’s final thoughts, a number of subjects were touched upon.

Andrew Lichterman invited us to reach out from the various campaigns against nuclear weapons and seek common cause with other movements. “The best way to make issues of war, peace, and disarmament a significant strand in these movements is to explore the common causes of the dangers and injustices we are struggling against.”

Pavel Podvig, spoke of the importance of pressure placed on governments to force them to reduce threats of war and stop the arms race getting out of control. “I think, unless we get to the point where it will become so dangerous that people will actually start raising their voices in a serious way, it’s very difficult to expect that the United States, Russia and others would return to serious arms treaty discussions.”

Dave Webb referred to the recently adopted Treaty on the Prohibition of Nuclear Weapons and the fact that huge numbers of the world’s population want their governments to sign it.

“While nuclear weapons exist, we are never safe from a military disagreement escalating into nuclear war.  The international community must now really lend its weight to the argument that the INF must be saved.  We need an outcry on this such as we’ve not seen for many years.  For it could be Europe that will host these missiles, once again, and bear the military brunt, but the problems will undoubtedly extend far beyond the continent.”

Meanwhile Regina Hagen took the opportunity to promote a campaign calling on the world’s population to press governments to do everything to prevent the INF disappearing.  All the information and resources for the campaign can be found at this link: www.tinyurl.com/yd58udp3.

“I think it is important that we become active and don’t get too depressed about the political situation, as bad as it is.  But we shouldn’t despair, we should use the energy we have and also encourage other people to join in this urgent action that is easy to do.” Support the Basel Appeal on Disarmament and Sustainable Security, and invite your mayors and parliamentarian to endorse it. The declaration is focused on supporting the INF Treaty and preventing the development and deployment of intermediate and short range nuclear-armed missiles, even if the INF Treaty collapses.  Send endorsements to: info@pnnd.org.