As Treaties Collapse, Can We Still Prevent a Nuclear Arms Race? 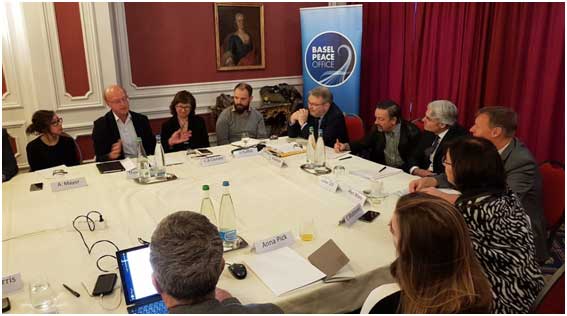 BASEL, Switzerland, Feb 4 2019 (IPS) – The United States last week officially announced it is walking away from the Intermediate Range Nuclear Forces (INF) Treaty, an agreement made between the USA and the Soviet Union in 1987 to eliminate a whole class of nuclear weapons that had been deployed in Europe and had put the continent on a trip-wire to nuclear war.

This follows US withdrawal from the Joint Comprehensive Plan of Action (JCPOA), an agreement which currently prevents Iran from building or acquiring nuclear weapons.

Meanwhile the START treaty, which limits the number of US and Russian strategic nuclear weapons, is set to expire soon, with no renewal in sight.

Russia and the USA appear to be intentionally reversing the arms control agendas of the early post-Cold War era, and are instead enhancing and expanding their nuclear arsenals. Other nuclear-armed states are following close behind.

This goes against public opinion, which is overwhelmingly opposed to a nuclear arms race, and to nuclear sabre rattling and threats, whether open or veiled, from Presidents Putin and Trump. Despite this, it’s extremely difficult for civil society to directly influence Russian or US nuclear policy.

That points to a deficit of democracy in both countries. It also points up the need for direct actions parliaments, cities and citizens can take to stop the assault on arms control treaties and prevent a new nuclear arms race.

To that end, mayors, parliamentarians and representatives of civil society organizations from 40 countries – mostly Europe and North America, including the mayors of 18 US cities– sent a joint appeal to Presidents Trump and Putin, calling on them to preserve the INF Treaty and resolve nuclear-weapons and security related conflicts through dialogue rather than through military provocation.

Will it change their minds? Not likely. But the appeal was also sent to the leaders of US congressional and Russian parliamentary committees in charge of armed forces (defense) and foreign relations.

It calls on them to refuse to authorize or allocate funding for nuclear weapons systems which the INF Treaty bans, for example ground-based intermediate range nuclear missiles, or weapons systems which could provide similar capability and be similarly destabilizing, such as air or sea launched nuclear-armed cruise missiles.

This could be the key to preserving the arms control measures of the INF Treaty even if it collapses. If the relevant committees refuse to authorize funds for these nuclear weapons systems, it makes it next to impossible for them to be developed.

The appeal also outlines a commitment by the endorsing mayors and parliamentarians to build support from cities and parliaments in nuclear-armed and allied States (which includes NATO countries) for nuclear risk reduction measures such as “no first use” policies.

Resolutions reflecting these calls have already been introduced in the US Senate and House of Representatives, for example the Prevention of Arms Race Act of 2018 (S.3667), and the No First-Use Act introduced last week by Senator Elizabeth Warren and Congressman Adam Smith, Chair of the House Armed Services Committee.

Similar resolutions have been adopted by the California State Assembly and at least three US cities, and more are pending in eight other US state assemblies.

This power-from-below approach – taking concerted action on nuclear risk-reduction and disarmament in federal, state and city legislatures – is just beginning.

It’s analogous to actions by over 700 U.S. governors and mayors who committed to implementing the Paris climate accord, despite the Trump administration withdrawing from it. In both cases, state and municipal officials have power to influence the global outcome.

In the US, action on nuclear disarmament by city governments is being advanced by the U.S. section of Mayors for Peace, a global network of over 7,000 cities, and the U.S. Conference of Mayors (USCM), a network of over 1400 major U.S. cities.

It has repeatedly urged Washington to show leadership in preventing nuclear war. For example, in June 2018 USCM unanimously adopted a resolution submitted by Frank Cownie, Mayor of Des Moines, Iowa and vice president of Mayors for Peace, with 25 co-sponsors, calling on the U.S. administration and congress to reduce nuclear tension with Russia, reaffirm the INF, adopt “no first use” and redirect nuclear weapons funding to meet human needs and protect the environment.

In Europe, cooperation between parliaments to advance nuclear risk-reduction, arms control and disarmament measures are advancing through the Parliamentary Assembly of the Organisation for Security and Cooperation in Europe (OSCE PA).

The parliaments of all European countries are part of it, along with the US, Canada, Russia and all former Soviet countries. A vital forum for dialogue between legislators from Russia and the West, the OSCE PA has succeeded in building consensus to support nuclear risk reduction including “no first use.”

Corporations that make nuclear weapons and their delivery systems have a vested interest in stoking the nuclear arms race, so they lobby governments accordingly.

But parliaments, state governments and cities can influence their behavior by divesting from them, analogous to the way some major cities are divesting from fossil fuel companies to fight climate change.

So far only a handful of cities and non-nuclear governments have divested from nuclear manufacturers, but in 2017 the United Nations adopted a Treaty on the Prohibition of Nuclear Weapons which could lead to a wider global divestment movement.

So, it may not be all up to Trump and Putin. There are powerful levers parliaments, cities and civil society can use to stop the unraveling of the arms control regime and prevent an arms race, and increasingly, they will use them.

As U.S. President Dwight Eisenhower said, “People want peace so much that one of these days governments had better get out of the way and let them have it.”

Christine Muttonen is a former Austrian parliamentarian who served as the President of the OSCE Parliamentary Assembly from 2016-2017. Jacqueline Cabasso is the Executive Director of Western States Legal Foundation and the North America Coordinator for Mayors for Peace. Alyn Ware is Global Coordinator for Parliamentarians for Nuclear Non-proliferation and Disarmament and Disarmament Program Director for the World Future Council.