Loitering at the brink of doom? 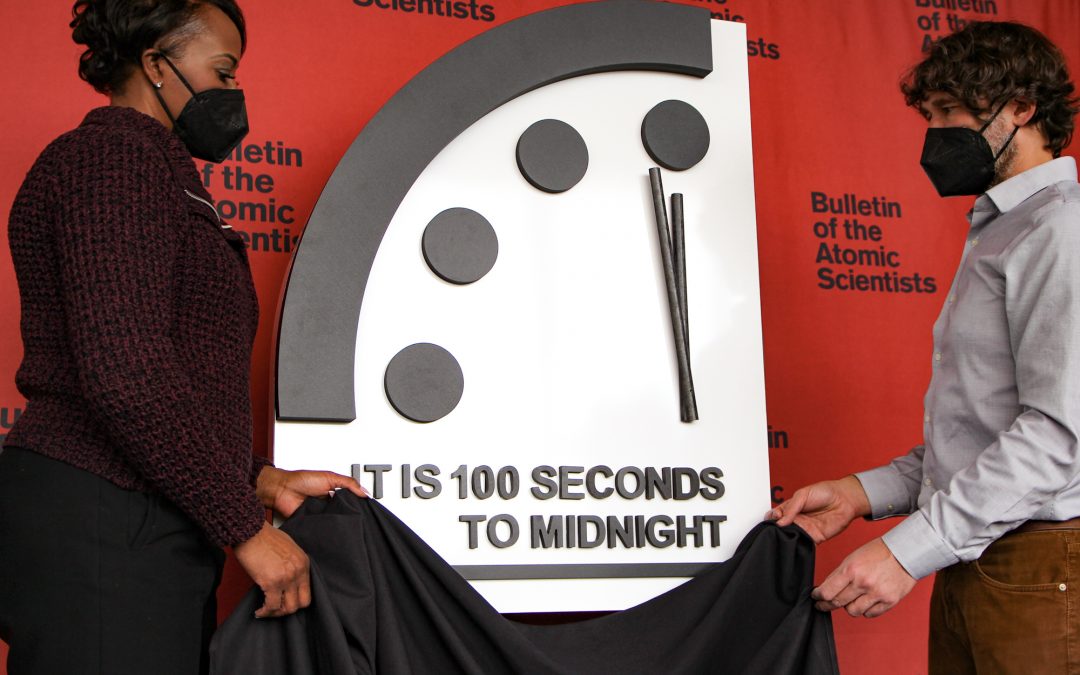 The Doomsday clock-hands have been stuck, seemingly, at 100 seconds to Midnight since 2020, nearer to the metaphorical (and we hope never literal) apocalypse than they officially ever were even during the heights and depths of the cold war. For perspective, the furthest away from midnight they have ever been was 17 mins to midnight in 1990. They were at 2 mins to midnight during a period of intense H-Bomb testing by both the US and the USSR during the early 1950s, when US pre-emptive strikes on the USSR were actively contemplated. In the year the world nearly ended twice (1983), with the Stanislav Petrov incident and the Able Archer exercises, the Doomsday Clock hands were at 3 mins to midnight.

They’ve been at 100 seconds to midnight for 2 and a bit years and three Doomsday Clock announcements – too long.

A factor that surely must have fed into the considerations of the Doomsday Clock’s rather highly qualified advisory panel has to have been the current standoff over Ukraine, and the attendant speculation – certainly a worst case scenario but by no means an impossible one – that high intensity conflict over and in Ukraine might spill over into a wider Russia-NATO conflict, which could easily in turn go nuclear, possibly via the use of tactical nuclear weapons in Kaliningrad.

A nuclear conflict between the US/NATO and Russia would of course, be civilisation-ending, and not merely because the targeting of any large number of cities would cause firestorms that would loft appx 150 million tonnes of soot into the upper stratosphere, replacing global warming temporarily with nuclear winter. A nuclear conflict even if it stopped with the use of only a very small number of weapons, and even if it targeted no cities at all, would, if it took place in space, destroy in its first nanoseconds, the technical basis of modern telecommunications. The effects of Electromagnetic Pulse (EMP) would damage or destroy everything from the internet to the high tension grid.

Russian senior strategic experts over a decade ago, seemingly warned Australian experts that in the event of nuclear conflict ‘missiles will go everywhere’, and that the ‘joint facilities’ in Pine Gap and Northwest Cape would be high priority targets.

Widespread conventional war over Ukraine could become the most intense conflict Europe has seen since 1945. In that case it would have a good chance to go nuclear, though nothing is inevitable. Even if it remained conventional it will be a catastrophe. An exit strategy that recognises the concerns of ALL involved – including Russia – has to be found.

Otherwise, ‘loitering on the doorstep of doom’ will become entering the abyss.

And the Doomsday Clock hands will be at midnight.

Such an outcome is not at all inevitable, but it’s up to us to make sensible decisions that avoid it.

These include a range of nuclear risk reduction measures ranging from No First Use of nuclear weapons, through de-alerting, to mutual transparency and military to military communication, with No First Use the one currently most talked about. According to Uta Zapf, formerly chair of the Bundestag’s committee on strategic weapons in a recent blog article:

We are indeed ‘loitering in the doorway of doom’. If we don’t want to go in there, the decision to take sensible steps and go someplace safer is still ours alone.

Photo: Doomsday Clock reveal 2022. 100 seconds to midnight. Photo courtesy of the Bulletin of the Atomic Scientists