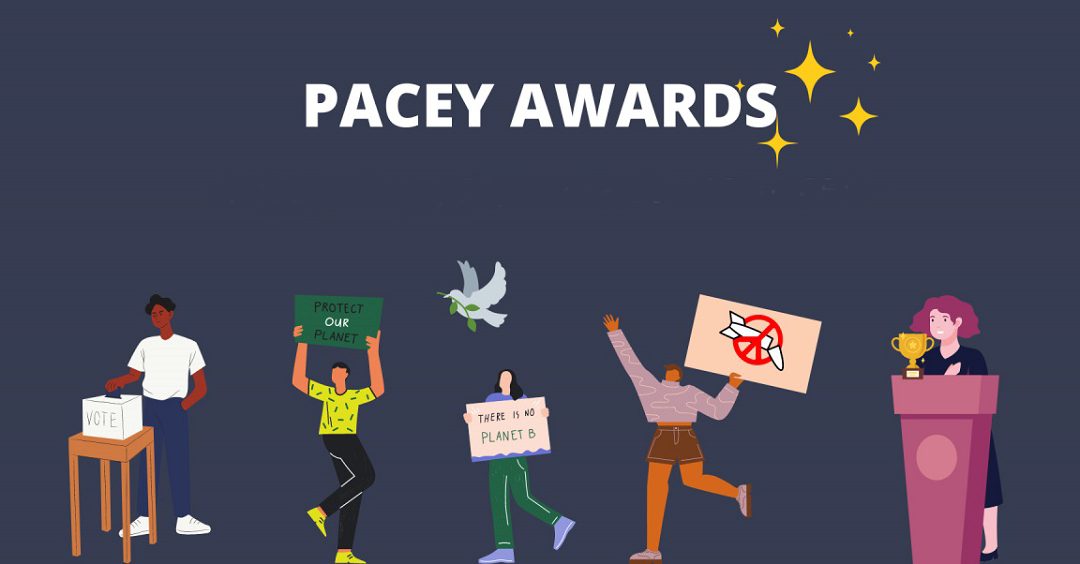 On January 21, the third annual PACEY Awards – Peace, nuclear Abolition and Climate Engaged Youth – were held, co-hosted by Basel City, the Basel Peace Office and Youth Fusion – the global youth network of Abolition 2000. The Awards demonstrate the connections between peace, nuclear disarmament and the climate; promote youth-led projects addressing these issues; and build intergenerational cooperation to strengthen campaigns and enhance the prospect of success.

This year 20 exciting youth projects were submitted for the prize. They included projects on nuclear disarmament (e.g. Youth for the Treaty on the Prohibition of Nuclear Weapons), abolition of war (e.g. Young World Federalists Montreux Summit), controlling small arms and light weapons (e.g. Maat for Peace project on Limitation of Arms Proliferation in the Middle East), women and youth in peacebuilding (e.g. the Yemen Together We Rise initiative), peace, human rights and the pandemic (e.g. the Kabataang Peace Warriors project in the Philippines), peace and the environment (e.g. the Adopt a tree, not a weapon project in the Democratic Republic of the Congo), peace and the climate (e.g. the 1.5 Degrees for Peace film project), promoting a climate-friendly diet (e.g. the Food@COP project), non-violence to ensure youth and human rights (e.g. the Nigeria Youth 4 Peace initiative) and more.

The winning projects for 2022 were decided by voting of participants in the online PACEY Award event. They are Faith for Earth Bosna i Hercegovina, a youth-led program building cooperation between Catholic and Muslim youth on environmental action, and Keep it in the Ground for Peace, a youth-led campaign to stop fossil fuel extraction in Africa. Each winning project receives €5000 prize plus program assistance from Basel Peace Office and Youth Fusion to help build project success.

“The projects are all excellent and innovative,” says Prof. Andreas Nidecker MD, President of the Basel Peace Office and founder of the PACEY Award. ‘They clearly demonstrate that young people around the world are able to speak passionately and expertly about the climate crisis, peace and disarmament, and take effective action to engage the public, impact decision-makers and shift policy.”

The PACEY Award event also included updates from the two winners in 2021 – World Youth for Climate Justice for their project to take the issue of climate change to the International Court of Justice, and Platform for Peace and Humanity for their project to establish a Global Coalition of Youth Ambassadors for the Right to Peace. Click here to see the video recording of the PACEY Award event including the presentations of the exciting youth-led projects.

The event was preceded on January 20 by Peace, climate action and nuclear abolition, an annual intergenerational forum between policymakers (legislators) and youth activists on the Climate / Nuclear Disarmament nexus, organised by Basel Peace Office and Youth Fusion. Click here to  see the video recording of the event.

The PACEY Award and the annual Basel intergenerational forums are just a couple of the numerous actions and events of Basel Peace Office (BPO) and Youth Fusion to advance the Climate / Nuclear Disarmament nexus and to build intergenerational dialogue and cooperation.

The Climate / Nuclear Disarmament nexus highlights connections between the two issues including that:

Other BPO/Youth Fusion actions and events to advance the Climate / Nuclear Disarmament Nexus and intergenerational cooperation include:

Action by youth on the climate issue, such as Students Strike for the Climate, has woken up policy makers and the international media on the severity of the threat and prompted governments to respond, even if not yet sufficiently to avert the threat. Youth Fusion is mobilizing youth globally to act on the nuclear threat to hopefully have a similar effect on media, public opinion and governments that still support nuclear weapons. And Youth Fusion is building intergenerational dialogue and cooperation, so even the not-so young can join.