Support for a Nuclear Weapons Convention 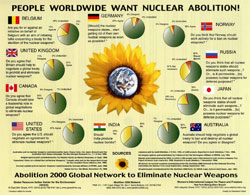 Public opinion polls around the world indicate that the abolition of nuclear weapons, in particular through the achievement of a nuclear weapons treaty, is supported by an overwhelming majority of people, including citizens of the nuclear weapons countries and their allies.

In addition, over 80 million people have signed the Hiroshima and Nagasaki Appeal calling for the global abolition of nuclear weapons, making this the petition with the most signatures in the world.

A Nuclear Weapons Convention is supported by most governments as expressed through their votes in favour of the United Nations General Assembly resolutions calling for negotiations leading to a NWC. This includes some of the governments currently possessing nuclear weapons or with nuclear weapons capabilities China, India, Pakistan and North Kore .

The United Kingdom, while not supporting the United Nations resolutions, has indicated that a NWC will be required at some stage, and as such has commenced work on verification required for nuclear disarmament .

Canada, a member of NATO, while not supporting the United Nations resolutions, has supported informal consideration of the NWC through such initiatives as a roundtable meeting in Ottawa in 2002 (see NWC Monitor Issue 3 )

Parliamentarians have introduced the NWC into the parliaments of a number of countries in order to encourage governmental support. This includes the United Kingdom and the United States .

The NWC is the subject of a resolution adopted every year at the United Nations General Assembly.