Faslane and Coulport – two vast military bases lining the Gare Loch and Loch Long, just a few miles from Glasgow. Not just ordinary military bases (if these can ever be ordinary) but the home to the delivery platform for the UK’s weapons of mass destruction – Trident, nuclear weapons at that, city-busters, specially designed to turn large quantities of human flesh to ashes. And not a kid-on, either, as Theresa May confirmed when she said she would pull that nightmare trigger as the the UK Parliament voted overwhelmingly to replace its nuclear weapons system in 2016. 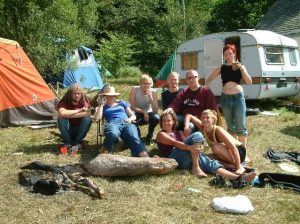 Everyone who opposes Trident and its grim replacement is invited to join for ten days of camping, plotting and taking direct action to disrupt this monstrosity whether it be, vigilling, blockading, breaking in, graffittiing, weapons inspecting, dancing in the road, planting seeds or what have you… the possibilities are enormous.

All welcome for as little or as long as you can stay. Bring friends, make friends, and enjoy camping in an ancient oak woodland adjacent to MOD Coulport, where the nuclear weapons are stored in sinister bunkers deep inside the hillside by one of the most beautiful lochs in Scotland. Join the movement to evict the undesirable tenants and return that hillside to nature.

Save the date. Spread the word. See the full camp briefing here (or download in Spanish here or download in French here). Download the Camp booking form here