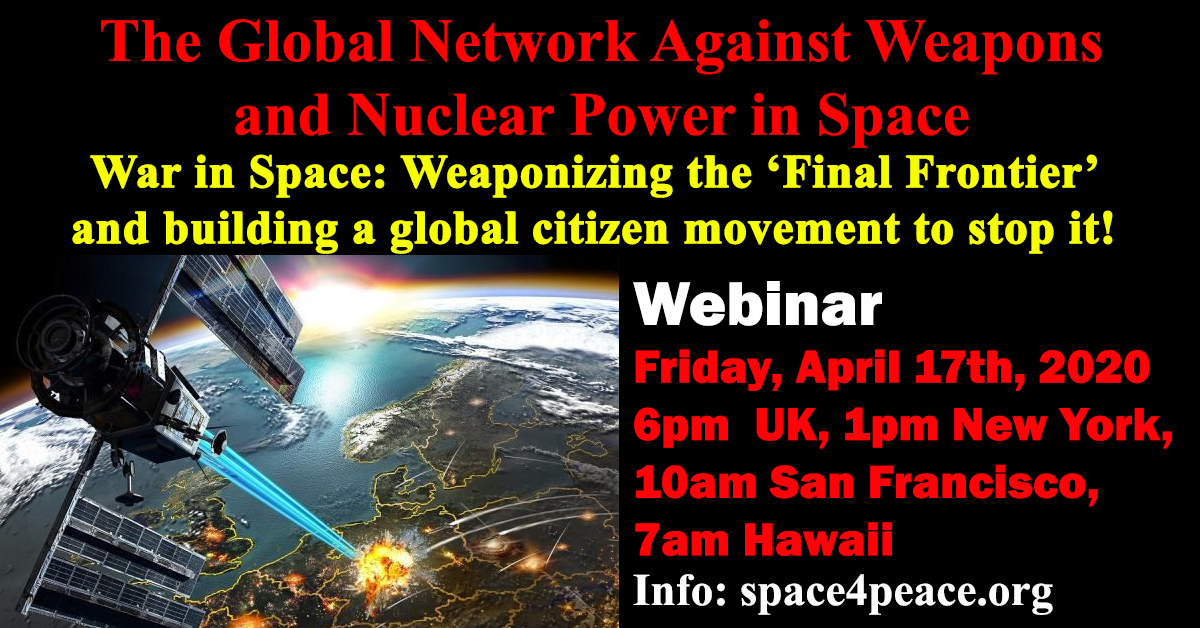 Prof. Dave Webb. Chair, Campaign for Nuclear Disarmament
Dave Webb has been Chair of CND since 2010 and is also Chair of Yorkshire CND. He is the convener of the Global Network Against Weapons and Nuclear Power in Space, a member of Scientists for Global Responsibility and until recently a Professor of Engineering and Director of the Praxis Centre at Leeds Metropolitan University. https://cnduk.org
Bruce Gagnon. Coordinator, Global Network Against Weapons & Nuclear Power in Space
Bruce was a co-founder of the Global Network when it was created in 1992. His articles have appeared in publications like: Earth Island Journal, National Catholic Reporter, Asia Times, Le Monde Diplomatique, Albuquerque Journal, Sekai Journal (Japan), CounterPunch, Space News, Z Magazine, and Canadian Dimension. Bruce published a new version of his book in 2008 called Come Together Right Now: Organizing Stories from a Fading Empire. http://space4peace.org/
Lynda Williams. Board Member; Science Educator and Activist, Global Network Against Weapons & Nuclear Power in Space
Lynda Williams (California): is a physicist and science entertainer who is devoted to nuclear disarmament and the proliferation of peace. She performs science cabarets and promotes scientific literacy as a means to motivate political empowerment, peace and social justice. Lynda lives and teaches in northern California and recently produced a CD with anti-Star Wars songs to benefit the GN – http://space4peace.org/.

It’s almost 40 years since Ronald Reagan’s ‘Star Wars’ speech proposed the ‘Strategic Defense Initiative’ – a ground, air and space -based missile defence systems to prevent a missile strike on the US. Now space is congested with around 2,000 satellites being used by business and the military to extend their global reach. New launches take place almost every day. Elon Musk’s Space X company is setting up a global 5G system from space and has been granted permission to launch another 12,000, and perhaps as many as 30,000, satellites in low Earth orbit in the next few years. There are plans to set up bases on Mars and the Moon and to mine the asteroids for rare metals and minerals. Space has become big business and those business interests are concerned about the safety of their investments.

Therefore, an increasing number of states are now following the US and forming their own “Space Force”. The US, Russia, China and India have already tested anti-satellite weapons. Military space planes and hyper-sonic missiles are being developed for early deployment. Satellites are already integral components of armed drone strikes, global surveillance and eavesdropping, dual use missile defence-offence systems and much more.

One accident or mistake resulting in the loss of a key space component could initiate a nuclear war.

What can we do to keep the heavens clear of weapons?

Yorkshire Campaign for Nuclear Disarmament (CND) in the UK and the Global Network Against Weapons and Nuclear Power in Space (GN) are organising a webinar to discuss these problems. We bring together key activists from the US and the UK to discuss the latest news and views on ‘star wars’, missile defence, space weapons, and the on-going campaign to prevent a war in space.